In 2012, Buon Fresco* painter A.T. Archuleta completed painting the largest outdoor Buon Fresco Rosary walk in the world located in the San Luis Valley just 20 minutes south of the town of Saguache which is the northern gateway to the San Luis Valley in South Central Colorado.  The Rosary walk is named after John Paul II which contains twenty six original/traditional buon frescos depicting the Mysteries of the Rosary.   The Rosary Walk is located in the simple setting of La Garita in the San Luis Valley in Colorado, the gateway to Pentitente canyon between the majestic San Juan and the Sangre de Cristo mountain ranges.  You will find that some monuments are over fourteen feet tall.

The paintings were created by a fifth generation descendant of the local area, artist A.T. Archuleta, who has his studio and gallery in Monument CO.

In 1879, an adobe dwelling was built east of the San Juan Bautista church as a casa de cura, rectory for Jesuit Priests of the Society of Jesus. Later, it served as a convento, convent for the Sisters of Loretto at the Foot of the Cross. The last remaining wall of this dwelling has been preserved as a monument with images created by A.T. Archuleta that is dedicated to the courageous Hispano people who settled in La Garita and to the Priests and Sisters that supported them in their Catholic faith. It is also dedicated to the Penitentes who helped keep the Catholic faith alive in the absence of priests during the early settlement.

* Buon fresco (Italian for true fresco) is a fresco painting technique in which ground pigments in water are applied to plaster while it is still wet, as  opposed to fresco-secco. The advantage of Buon fresco is its durability,which is important to the outside setting of the La Garita Rosary Walk.  By contrast, in fresco-secco the color does not become part of the wall and tends to flake off over time. The chief disadvantage of Buon fresco is that it must be done quickly (within 2-3 hours) without mistakes- requiring a special artist with speed, endurance, and accuracy. 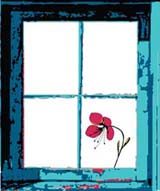